Here are two images both produced by overlapping 88 different photographs and playing with the opacity. My original intention was to create a (now so fashionable) time-lapse of my partner’s now 87 year old grandmother growing up and ageing through childhood, teenage-hood, marriage, motherhood, grandparent hood and now enjoying her old age with biscuits and TV.

I rummaged around and scanning every photograph I could find (over 100) and whittling them down to the ones with the face looking in the same direction. In Photoshop I adjusted the opacity and began overlaying the images matching the eye-line. All this was intended only to simplify the After Effects process. What I ended up with was something rather beautiful instead.

Playing around with each layers opacity and slight colour enhancements I think brings out each individual image, I believe theres a real depth to the pictures. I then went back and recorded them to show of her younger self, her old age ghosted in the background. What’s interesting is not what has changed but what has stayed- while the Portuguese sun has added wrinkles her smile has never really changed, assaying the same while the rest is a blur.

And what about the original video that kicked all this off? Well, I will get around to that…. Eventually.

Okay, I’ll try and make this precise, there is so much I can say about Michael Moore’s rambling 13 rules of documentary making (link posted at end of article), I found it offensive on many levels, but I’ll try and make my reply as bright, breezy and snappy as possible (on this i fail I should warn you now!)…I could of course sum it up in three words…WHAT A COCK!

1. I consider myself a filmmaker, an artist, AND a documentarist, how very dare you tell me what to call myself, and really what does it matter. Oh and Michael, the notion that a ‘documentary’ film can be entertaining is not something you’ve invented, I have hundreds that fall into this category…none if them were made by you strangely enough though.
2. Right, at number two and I’m starting lose my shit already, did the man that brought us Corporations are…

Haven’t done one of these for a while.

Zoo photography is wildlife photography for those not wiling to wait. Alas this doesn’t mean you get the photographs you want. Out of 224 photographs taken I was happy with…1. this one above is, like so many, one I am almost happy with.

The mistakes first, for which I can see two:

1. The image is very grainy, This is down to a) Enlarging the focus point of the image. b) Overdoing the sharpening tool.

2. The face is still shy of focus. This is even after I cranked up the sharpening tool to 11. This is because unlike in the wild zoo animas are well kept behind glass. Your sensor is snapping a photograph not just behind the glass of your lens but also the glass of the enclosure.

While I may have listed only two mistakes they are both killers.

Primates themselves hold a fascination for me. The Orangutan is perhaps one of my favorite creatures (many a disappointing picture of them too) and the Chimp I find equally fascinating and rather creepy. In the end I gave up trying to get that ‘perfect shot’ taking instead huge amounts of pleasure in watching them. This toddler chimpanzee especially was a very delightful thing to watch, as it dug a hole and began throwing dirt over his nearest elder- to their obvious frustration.

When an argument broke out and the shrieking began I not only remembered my recent cinema trip to see the latest in the Planet of The Apes series but also a little seen but rather excellent documentary called Project Nim, about Nim Chimpsky (the name does make me titter each time) being taught sign language, and the debate around him.

With moments of pure escapism, such as watching a young chimp annoy his family, perhaps its best we all live that moment and not worry about how it looks through a lens.

In my old age (I recently celebrated my 24th Birthday) I have become slightly reflective. Apologies in advance.

“I need a new better camera.” or “I need updated software”

How many times do I hear this? Instead of wanting what we don’t yet have, why not play with what we do. Robert Frank did not have a 2014 DSLR yet still managed to photograph The Americans. Thelma Schoonmaker didn’t have FCPX yet still edited Raging Bull. Lets stick with what we know. Understand how to work it, improve with it. Fuck up with it, and eventually watch it die of overuse. Then we can have new things, perhaps creating something worthwhile with the old one. 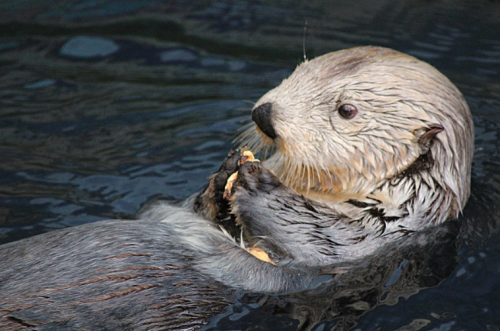 Thanks to the good users of Viewbug for picking my Sea Otter photograph as one of their peoples choice. This hungry fella’ was taken at the Oceanario de Lisboa, a very fine Oceanarium to go to that does a lot of good in this world. Far more than America’s SeaWorld chains that have constantly been in […]

It’s 2008, moments before a BBC broadcast live from the stage at TED. But something’s gone wrong. The house lights are still up, the camera ops are looking at one another, official-looking folks are wandering at the stage apron muttering into headsets, and the panelists are sitting patiently onstage but looking, increasingly, baffled. Minutes go by.

And then a voice rises from the audience, wondering “why at a technology conference everything is running so shittily”! As Kim Zetter wrote: “at least that’s the word I think he used; it was hard to hear the last word through the audience’s laughter.” It was Robin Williams, who’d spent the day watching TED, and who now jumped out of the audience to grab the mic and reel off 10 or 15 minutes — reports vary — of improvised…

Perhaps this blog should be renamed to “Remixes and Plagiarism” but not to sound to much like a broken record I found a rather Lynchian video exploring the ideas of originality in Pop’ Culture. In it the characters quote Mark Twain leading me to find a wonderful letter by him on this very subject. Do check out the video below and if you liked that letter do follow Letters of Note on twitter. Enjoy!

How to Win at Kickstarter

I know you have always wanted to own a nintendo-themed italian restaurant called ‘Mario & Linguini’ and you may of heard of an awesome site called Kickstarter where charitable people go and fund your extravagant desires.

Alas this blog is here to you that this might not actually be the case, especially in my line of work (filmmaking). For every Iron Sky there are hundred of film failures, mostly featuring Zombies or topless women (and probably both). Previous success stories will not help you either. Mario Tapio Kines is a filmmaker who has feature length films to his resume, both funded through online crowdsourcing, the first from way back in the previous century before it was easy and cool. His third feature never even got to the half way point on Kickstarter, Luckily for us he has written an article on his failures here.

I will deviate from my usual filmmaking/photography interests and talk about all form of creativity. So here it is, the 5 ways to win at kickstarter:

1. TELL US WHY IT’S WORTH IT: Unless you have a cure for all types of cancer, or a non pyramid scheme than can make all your backers uber-rich it is likely you will have to Sell your idea. This means a fun, informative and memorable video, not just you mumbling into your webcam. This may take time and effort but get it wrong and deal breaker. Pitching skills can be found here:

2. WORTHWHILE REWARDS: Some where outraged when that rich guy off of that medical comedy on TV asked us poor people to fund his film. I was not, what I was outraged by was the complete lack of worthwhile rewards (eg. $10 would get you a  link to the Vlog!). Zack Braff made his money even with his stinking rewards but you will not. People want to feel special, what there getting is something actually worthwhile. Don’t charge £30 for a crappy DVD, ask for £30 and in return the sponsored will get a picnic on the set (travel costs not included). For £100 why not offer an advert for there business/band/wedding whatever. If your a graphic designer why not do some nice “limited posters.” There is a reason table top games and figurines do so well, people want to treat kickstarter not as a charity but as a shop of unique oddities. You have to do the same.

4. ADVERTISE YOUR PROJECT….WELL. Dear @twitterfollower please would you back my project”  or “hey @Facebookbuddy back my project, yoy” will piss people off. Sure use social media but don’t whine and bitch to people, be selective. My friends will be bribed by a pint, and once they have put money down get them to share it to their friends using the same tactics. The Mario Kines article linked above gives more information. No one created a meme by shouting, just be nice.

5.  DON’T SET YOUR SIGHTS TOO HIGH. We all want to be millionaires but unless you want to re-create the Oculus Rift (and a tardis so you can go back and take it) you won’t get it. Budget as cheaply as possible. Your photography book will cost £50,000 will it? Or your dream short film will cost no less than £15,000. Give up. Start a little at a time, you won’t get the money unless you reach the targets. Ak for smaller funds. so £500 and then work with what you got. As a large stripy supermarket says “every little helps.”

So now you have the information, go and conquer kickstarter!

Everything is a Remix

My last post (directly below) has had a bit of interest via twitter, so I think several mini blogs will follow addressing and adding to these points. Above is a fantastic film talking more about theft and inspiration in the arts.

Below a very dedicated person has mashed up Star Wars with all it’s filmic influences.

And one more for luck here’s a guide on the (many, many, many) films that influenced the career of Quentin Tarintino

A part of doing creative work is (to be blunt) stealing other people’s ideas. We may dress it up, call “Inspiration” or “Referencing” but if we are being truthful with ourselves what we do is steal. There is a rather good book about it by Austin Kleon. Who’s page excerpt is below

Before any project I look through many simular videos on youtube/online. Not to “Plagiarize” or “Imitate” (right hand side of the list) but to work things out. Editing film is often “how do we fit these things  together.” Less jigsaw puzzle more wind up toy, you could put those cogs anywhere but only one way will make it flow, other variants may work but probably only once before it twitches and dies.

I am at present working on a pet-project, the first in a very long time. Tt involves finding, scanning and merging (hopefully) hundreds of photographs of the same woman into both a moving and still image. The work is exciting and hopefully will be something that I can share on this blog. But how to do it? So far I have written notes or “Credited” (as seen on the left hand side) about 15 similar projects but one truly stands out. The video is below and while a few minuets long is deeply beautiful, please do take a look: